The Intrusion of Jimmy
by
P.G. Wodehouse

"With some, there is an alloy of apprehension in the metal of their happiness, and the strain of an engagement sometimes brings with it even a faint shadow of regret. 'She makes me buy things,' one swain, in the third quarter of his engagement, was over heard to moan to a friend. 'Two new ties only yesterday.' He seemed to be debating with himself whether human nature could stand the strain."

"Bright eyes might shine for him when all was over, but in the meantime what seemed to him more important was that bulging eyes would glare.

"A man's first crime is, as a rule, a shockingly amateurish affair. Now and then, it is true, we find beginners forging with the accuracy of old hands, or breaking into houses with the finish of experts. But these are isolated cases. The average tyro lacks generalship altogether. Spennie Dreever may be cited as a typical novice. It did not strike him that inquiries might be instituted by Sir Thomas, when he found the money gone, and that suspicion might conceivably fall upon himself. Courage may be born of champagne, but rarely prudence."
Posted by Sarah Tressia at 4:58 PM 1 comment:
Labels: Reading List

The original recipe for this Corn-free, Egg-Free and Soy-Free Mayonnaise came from Adventures of a Gluten Free Mom. There are several ingredients that I am not able to eat, so here is my adapted version:

Place ingredients in a canning jar. Secure lid and shake until mixture is combined and thickens.
Store in the refrigerator for up to one week.
Posted by Sarah Tressia at 4:24 PM No comments:
Labels: condiments

No Picnic on Mount Kenya
A Daring Escape, A Perilous Climb
by Felice Benuzzi

"In order to break the monotony of life one had to start taking risks again, to try to get out of this Noah's Ark, which was preserving us from the risks of war but isolating us from the world to get out into the deluge of life. If there is no means of escaping to a neutral country or of living under a false name in occupied Somalia as many have done, then, I thought, at least I shall stage a break in this awful travesty of life. I shall try to get out, climb Mount Kenya and return here."

"Two insignificant, humble, escaped prisoners of war, numbers 41304 and 762, sat there gazing spellbound at the glowing colors cast by the setting sun on the mount of their dreams, now resplendent as though celebrating the glory of creation."

A package recently arrived from my friend Theresa. Enclosed was a darling heart garland and a beaded heart. Thank you Theresa! 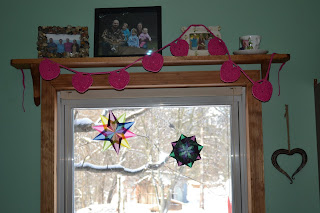 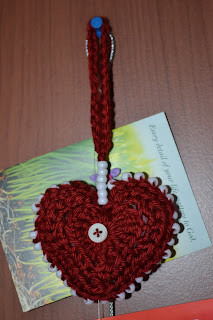 "With hard work and patience, the vision could become real: a house could arise, coffee bushes put down their roots and bloom and fruit, shady trees grow up around a tidy lawn; there was order waiting to be created out of wilderness, a home out of bush, a future from a blank and savage history, a fortune from raw materials that were, as they existed, of no conceivable value at all.

"The prospect of a party, even if it consisted only of one guest with nothing beyond a clean pair of socks in his saddle-bag, always gave Tilly's eye a sparkle and her laugh a new contagious gaiety. Life could stab her to the heart, but her powers of resilience were great. She could write off her failures, not because she did not mind about them but because she minded too much; the next venture was sure to succeed, life would be unbearable if it did not."
Posted by Sarah Tressia at 6:09 PM 1 comment:
Labels: Reading List 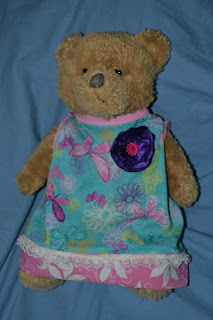 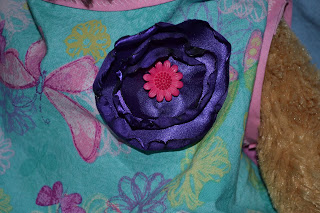 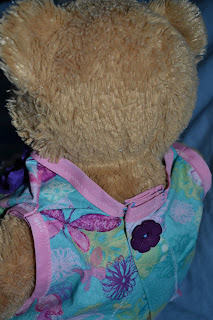 I started with the Sleeveless top pattern from Making Children's Clothes by Emma Hardy. Then I made a few changes, so it would better fit a teddy bear. 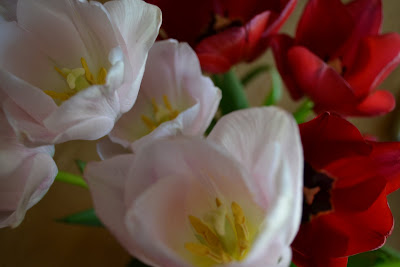 "But friendship is precious, not only in the shade, but in the sunshine of life."
~Thomas Jefferson

Posted by Sarah Tressia at 12:40 PM No comments:

O the deep, deep love of Jesus, vast, unmeasured, boundless, free!
Rolling as a mighty ocean in its fullness over me!
Underneath me, all around me, is the current of Thy love
Leading onward, leading homeward to Thy glorious rest above!

O the deep, deep love of Jesus, spread His praise from shore to shore!
How He loveth, ever loveth, changeth never, nevermore!
How He watches o’er His loved ones, died to call them all His own;
How for them He intercedeth, watcheth o’er them from the throne!

Posted by Sarah Tressia at 11:19 AM 1 comment:
Labels: Quotes 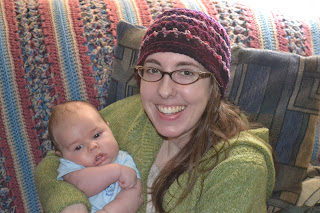 My mother always encourages me to research, so after having surgery in August I diligently searched for another option to add to my battle plan against Crohn's Disease. Four years ago I eliminated gluten, casein and all my IGg food sensitivities from my diet. I've been taking many vitamins and supplements recommended by my doctor and a few others I have found through researching or word of mouth. The supplements are targeted at treating a leaky gut as well as providing immune and liver support. I also receive nutritional IVs and acupuncture on a regular basis. Everything was helping, however, something was missing. In my research I came across an article about Low Dose Naltrexone. The article is from a respected clinic and I decided it would be worth trying. In October my doctor gave me a prescription for 4mg. It is definitely helping. Low Dose Naltrexone has been shown to be an effective therapy for many auto immune diseases and cancers. If you would like more information click here for the article link.
Posted by Sarah Tressia at 4:24 PM 1 comment:
Labels: Children and Healthy Living, Gluten Free Information

My Grandma Jean's standby meal is beef and noodles. Recently my mom and I created a gluten and casein free version. 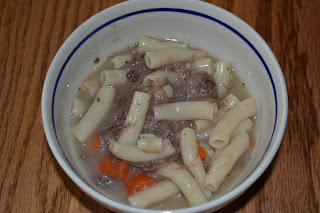 We used Tinkyada Organic Brown Rice Pasta for the noodles and left over roast for the meat.

bring to boil then add meat and noodles and let simmer 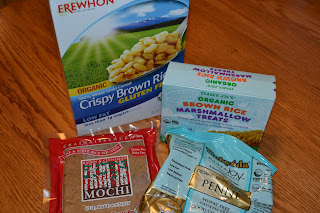 I started making gluten free waffles after purchasing the book Cooking for Isaiah by Silvana Nordone. The recipe is simple and tastes good. I have taken waffles for my travel food, had them with maple syrup and used them for bread. Some time ago I made waffle burgers for Miranda and Noah. Miranda kept asking to have them again. When we finally did I asked her if they were everything she remembered. She responded with an enthusiastic, "yes!" 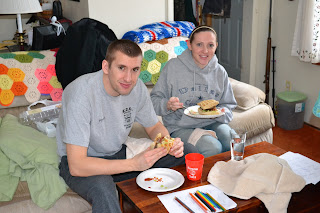 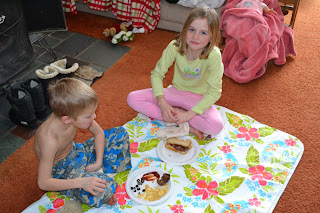 Our latest waffle meal was One-eyed-Jacks - waffles with an egg in the middle. I cooked them on my cast iron pizza pan that my parents gave me for Christmas. 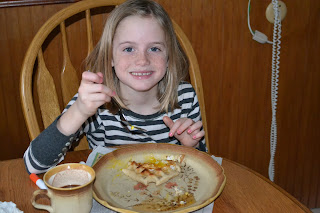 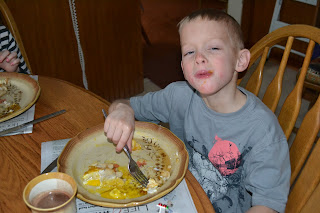 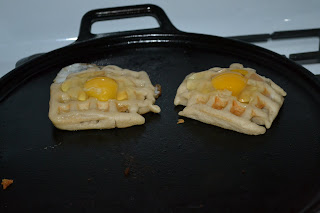 When I opened Karamel's door this morning she was completely hidden. She burrows nicely in her straw. Poor Koko doesn't make a nest as well as Karamel. Koko just endures the cold and waits for spring. Guinea is doing well in his hutch and gets upset if he is not one of the first to be fed and watered. Knightly loves this cold weather and the snow. Taffy wanted someone to play and didn't let me get a good photo. 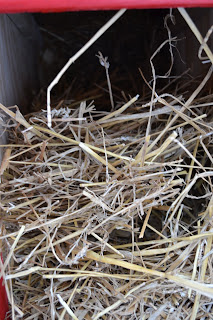 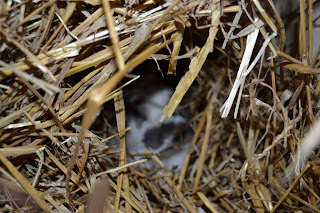 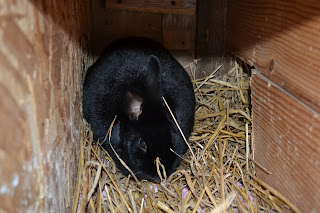 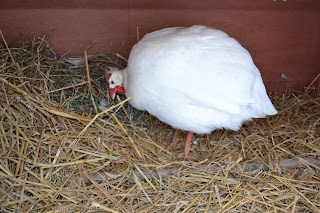 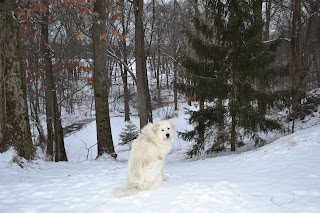