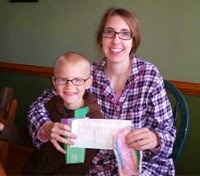 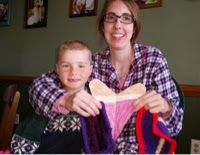 Posted by Sarah Tressia at 4:15 PM No comments: 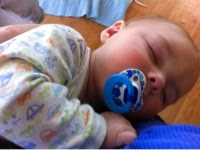 Posted by Sarah Tressia at 4:47 PM No comments:
Labels: Nathaniel

This is modified from a recipe on My Whole Food Life (mywholefoodlife.com) 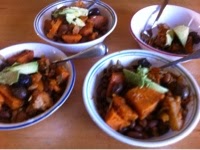 The other day Isaac brought in a handful of worms to show me. Abigail, Matthew, Josiah and Isaac all help with the goats, chickens and rabbits. By the end of the day they are usually quite dirty! There are many benefits to homesteading together as a family and to interacting with the animals and the soil. The link below is to an article that explores the benefits to children of spending time in the dirt.

This picture was taken awhile ago... Enjoying a book on a cold day.

Posted by Sarah Tressia at 8:27 PM No comments:
Labels: Pictures - my kiddos

A Boy and his Goat

Posted by Sarah Tressia at 8:22 PM No comments:
Labels: Pictures - my kiddos

Sauté the peppers, onions and celery. Add the broth, sweet potatoes and seasonings. Bring to a boil the reduce heat and simmer until sweet potatoes are tender. Add black eyed peas and cook until heated through.

I used two and a half large sweet potatoes, half a stalk of celery, half a bag of frozen peppers and onions with 1 heaping teaspoon cinnamon, 1/8 teaspoon cayenne pepper and 1/4 teaspoon red pepper flakes. I sprinkled on a liberal amount of the other seasonings. 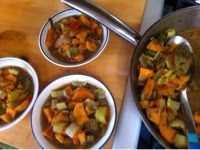 This bag is made from one leg of a pair of jeans. It is an easy and adorable gift. Purchasing the jeans from the thrift store also makes it inexpensive.